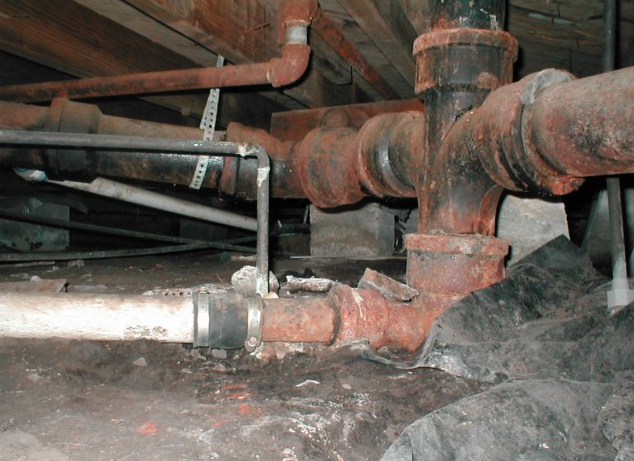 Replacing a plumbing system will prove costly yet there is a good chance the cost will be covered by your homeowners insurance eplicy. Though the overwhelming majority of property insurance providers insist they provide coverage for replacing compromised cast iron pipes, the truth is some provide no such coverage and many will combat legitimate claims. The bottom line is replacing cast iron piping requires money, time and effort. This is precisely why some homeowners insurance providers sometimes attempt to undermine a perfectly valid policyholder claim.

Contest the claim denial or underpayment and the denial just might be overturned. After all, it is not your fault that cast iron pipes were installed in your home prior before you bought it. As a result, you should receive at least some compensation for the cost of replacing these problematic pipes. However, if your insurance provider wants to play hard ball by denying your claim or under-compensating you for your claim, it is important to take timely action. The longer you delay the replacement of these faulty pipes, the greater the chances are that you will have a plumbing emergency that damages your home or other building. Keep pushing for compensation, consider taking legal action and you will dramatically increase the chances of the insurer providing at least partial compensation.

Why Cast Iron Pipes are Such a Problem

Cast iron pipes are likely to rust, corrode and ultimately fail. If such pipes fail, there will be significant leaks and water damage that results in thousands of dollars of damage to your property. A chemical reaction occurs when water moves through cast iron pipes, generating hydrogen sulfide gas. Such gas oxidizes, creating sulfuric acid that proves corrosive to the pipe's walls. Unfortunately, many of the drain cleaning products available at Florida stores contain sulfuric acid. If such products are dumped down the drain, they will hasten the deterioration of your cast iron pipes.

Homeowners insurance providers often deny claims based on a loophole known as the 72-hour window for notification. Fail to notify your insurance provider within 72 hours of when you supposedly knew or should have known about the loss in question and the insurer might deny you claim. This is problematic as you might be on vacation or on a business trip when your home's cast iron pipes caused water damage or another problem. In most cases, such coverage merely requires repairing the damaged pipe rather than replacing the pipe or all of the cast iron pipes in your plumbing system.

If you are planning on buying a Florida property or if you currently own property in Florida, it is imperative that you have the right homeowners insurance coverage. Do not simply assume your current homeowners insurance coverage will suffice. You need an insurance policy based on the specific coverage your unique home needs to remain intact, safe and livable in the years and decades to come. Even if coverage for the replacement of cast iron pipes seems fairly expensive, it is worth the money, especially if the home you have your eye on or the home you purchased was built prior to 1975 when cast iron pipes were commonly used. As long as you have the proper coverage, you will be provided with the compensation you need after your property's cast iron pipes are replaced.

Alternatively, if your homeowners insurance policy does not have the right coverage, it is only a matter of time until problems with your plumbing system arise that necessitate the attention of a professional plumber. Why bother spending through the nose to repair a damaged home caused by faulty cast iron pipes when you can have those flawed pipes replaced before they cause problems in the first place? The moral of this story is to be proactive by having your home inspected for the presence of cast iron pipes. The proper insurance coverage must be in place to ensure you do not have to zap your savings to pay for new piping.

If your home, business or other building has cast iron pipes, it is time to replace them. Our Florida plumbers are here to do the work on your behalf. Reach out to us at (561) 475-1251 to learn more about our plumbing services and schedule an appointment.