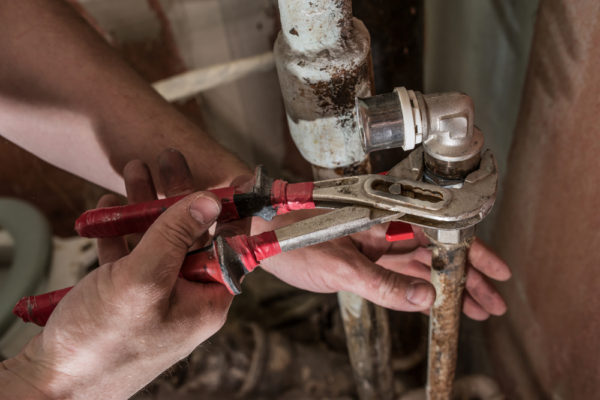 Your home's pipes will not last forever. There will come a day when it is time to replace these pipes in order to ensure water flows in a safe and constrained manner throughout your home plumbing system. The question begs: why and how do pipes wear out? The answer is not the same for every single Boca Raton property. In some cases, water chemistry results in pipe failure in as few as two years. However, most homeowners get several decades worth of use out of their home piping. Let's take a closer look at why pipes wear out.

Pitting corrosion is essentially an attack against the pipe or fittings of copper tube. This attack occurs within the interior of the copper water pipe. Most corrosion is limited to diminutive portions of the metal surface. Hard water is often the cause of pitting corrosion. If water is overly-hard or even moderately hard with a pH between 7-7.8, there is good chance corrosion will occur. Such pitting tends to be comparably narrow and deep, causing pipe failure in due time.

If the water in your home is soft, a completely different type of pitting can occur. In general, water with a pH below the 7.2 benchmark is likely to result in pitting. However, this type of pitting is fairly rare when the temperature is 140 degrees or less. Soft water will likely result in pipe failure just like the hard water problem detailed above. The final type of pitting occurs when water is soft and hard with a pH higher than 8.0. This comparably general pitting is typically quite shallow and wide, leading to water with a blue hue, pipe blockages and/or byproduct releases.

Pipe Movement is a Problem

When water pipes are not properly secured, they have the potential to move within the walls. Pipe movement is especially common when the water is rapidly turned on/off. Chances are you have likely heard pipes clanging within the walls or floors at one point or another, whether it is within your own home or another building. Such clanging is referred to as water hammer. The pipes will sway to the point that joints within the pipe are weakened. The joints can fail, causing pressurized water to exit the pipe. The damage that results has the potential to prove quite costly and disruptive.

The Pipes are Clogged

Oftentimes, clogged pipes spur the need for pipe replacement in Boca Raton. From hair to toys, food, the buildup of minerals and greasy/oily substances, all sorts of foreign objects can end up within pipes and cause premature aging. If the pipe is clogged, the water pressure will build-up to the point that the pipe cannot stand the pressure. The last thing you want is for your pipe to burst due to an abundance of pressure. If you notice there is less pressure than you are used to when turning on the faucet, it is a sign the pipes are blocked. Rather than let the problem worsen, it is best to reach out to our team for pipe replacement in Boca Raton.

Issues With the Water Pressure

If your home's water pressure is abnormal, there will likely be problems with the pipes in due time. A considerable hike in water pressure can cause a pipe to burst or even lead to plumbing system failure. Water pressure issues have the potential to compromise the functionality of your toilet, faucet and so on. When the water pressure increases, your home plumbing system's pipes might not be able to adequately contain the flow of water. If the pressure continues to build, there is a chance a rupture will occur.

Consider connecting a pressure gauge to your sink spout and turning on the water by way of the faucet handle. The average home has water pressure between 30 psi and 50 psi. However, there is the potential for water pressure to move beyond 60 psi and cause damage to the plumbing fixtures as well as the pipes. If you are even slightly suspicious your home's water pressure is higher than it should be, reach out to our team for assistance. We will determine if plumbing replacement in Boca Raton is necessary or if a pressure reducing valve will suffice to keep the water pressure at a safe level.

Do you need pipe replacement or repair? Our pipe specialists also provide restoration services to boot. Give us a call at (561) 245-7435 to learn more about our services and schedule an appointment.